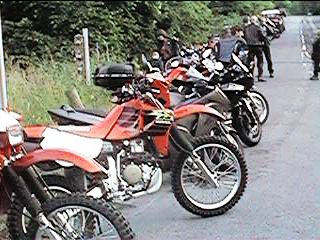 This club drifted into existence sometime in the early sixties. OK for those who like details it was March 63, Bob and Ann Jones failing to find a local sidecar club did something about it, unlike most other people and 7 outfits turned up for the first meeting and that number soon grew. (for details see Storyville) However sidecars are now a minority interest but not the only one (nudge nudge). The club used to have its own building round the back of the pub but then some landlord in the past flattened it, no doubt to drive the boys into the bar full-time. Nowadays it all happens on a Tuesday in the Huntsman Pub, Eridge, near Tunbridge Wells, East Sussex, England (see map). All are welcome all ages, all sexes, all bikes and 3 wheelers, anything goes though crashing into the bar on a Harley is frowned upon by some people (they don't like Harleys). We have a few lightly organised events which you can read about on the calendar section. I know if you hang out in Arizona or somewhere you may have problems visiting but nevertheless if your passing, drop in and say hello. (since I wrote this in 1999 I now know that we have an audience in Arizona so maybe someone will drop by soon)